I love the ones about books and tea. They’re full of pretty pretty pictures. Of books and tea. Hah. I followed a blog about quotes but I unfollowed it because it’s too full of Harry Potter quotes. I mean, I don’t dislike the books, but they’re not all that, you know. There are plenty of better written books for children which are much more superior in prose, plot and character developments. They just weren’t published in the internet era. That’s the one thing that had made Potter so massively popular. Social media and clever marketing. Good for the author, but I sometimes detest the over-hype that surrounds it. Also, I expect variety from blogs like that. Occasional quotes from young-adult books are okay, but surely not all the time? Also, what put me off is the tendency of book loving blogs to post pictures of people reading books in their underwear, with captions like ‘Readers are sexy'. No offense but the thing that makes readers ‘sexy’ (roll eyes) is their minds, not their bodies. Those kind of pictures are just so unnecessary. Worse are articles that proclaim that people should date readers because they have more empathy and are more intelligent. What a load of bollocks that is. The only thing that a reader like me have over non-reader is probably a better vocabulary. Just because I read more, it doesn’t mean I’m a better human being or more clever.

It was a hit and miss the first few weeks, but now I am content following only a handful of blogs for books lover and tea lover. Tumblr is fine for people who don’t really like reading long blog posts and are just happy looking at nice pictures. I will just avoid fandoms of any kind for my peace of mind.

Sunny bookstore is closing its doors. I feel sad because it’s honestly one of the best indie bookstores in the island. The staff are always friendly and super knowledgeable about books. Their selections are pretty good too. They even have a decent collection of science fiction and fantasy books. C said that it’s inevitable. E-books have changed the landscape of publishing and
the way bookstores operate. I went there with her last weekend and they’re having a massive sale. Most of the books were already gone, but C was still excited because the only books she reads are the ones published by Harlequin or the likes of them and there were still tons of them available. The covers, man, so embarrassing. She doesn’t care, haha. I mean, look at these. 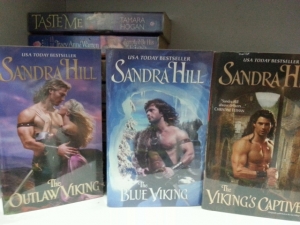 In her defense, she usually chooses the ones with more dignified pictures, but I reckon the stories are still similar. They’d just change the backgrounds. This one would be about vampire, that one about marines, the other one is about sailors, etc etc. Salacious sex scenes aside, the plots are generic and offer nothing for brain stimulation, totally face-palm inducing. Again, C doesn’t care. She is so unapologetic about it, I can only laugh. She bought two big bags full of them books.

As for me, there was nothing much left in the Literature shelf but they still had pretty decent leftovers in SF section. I bought some books by Ursula K leGuin, Neal Stephenson, Iain M Banks, Sheri S Tepper and a poetry book by Paul Laurence Dunbar. Not bad. They also had a complete collection of David Weber’s Honor Harrington series (how awesome is that!) but I had no money left. It’s not like I have enough space in my room anyway.

I don't think it's my place to say that the closure of Sunny bookstore is the end of an era, esp since I don't have any huge attachment to it unlike other people who grew up perusing their store, but I do think brick and mortar bookstores are facing more challenges nowadays, the indie ones especially. More and more people prefer e-books. I wish the staff big luck, though. They're actually the store's biggest assets.

A good friend of mine wanted to buy some PS Vita games from Amazon Japan and asked if she could use my account. So I browsed the site looking for stuff that might interest me and I found the book. It arrived yesterday and I was so ecstatic. Beautiful pictures. A nice story. Best of all, it’s about loving books and about loving reading. Just perfect. 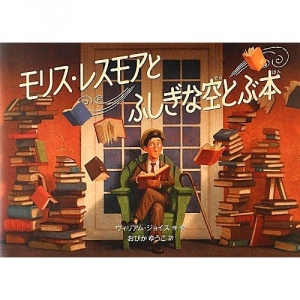 Reading it, I realize how bad my Japanese is nowadays. I quit the course about two years ago and I didn’t really go back to reading manga again. The electronic dictionary I got just sits on the shelf gathering dust. Perhaps I need to start again. 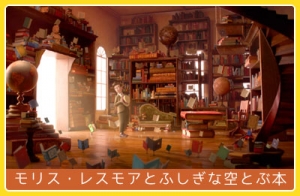 The book is for kids, really, so the sentences are simple, but sometimes the hiragana confuses me. I much prefer kanji because it’s more straightforward. Nonetheless, I really enjoyed the book. The pictures are really pretty. And there is an animated movie based on the book that won an Oscar. Will watch it this weekend.

How dreary to be somebody!
How public like a frog
To tell one's name the livelong day
To an admiring bog!

Winning a lottery seems to be most people's favourite topic for day-dreaming. What if you win USD 100M after taxes? What would you do with that money? I was asked this question by a colleague one day and I was silent for probably too long of a time that he exclaimed,"Jeeze. It's not like it's rocket science! You think too much.'

Thing is, this scenario is too unrealistic for me, simply because I don't buy lottery tickets. I think it's a very bad investment, and a bit of a cruel one. It's preying on gullible people and people who don't really know how statistics works by giving them an illusion of hope, just like gambling. Besides, winning that much money would mean that I won't need to work anymore and while this financial freedom is nice, would it really make me happier? There are many stories about lottery winners who get broke after a couple of years because they don't know how to handle money. And money do change people. Were I to get that USD 100M, I am sure it would change me, and people around me. It would change how they look at me, what they want from me and how they treat me. It would be difficult to trust people. Again, would that make my life happier?

Hm. Maybe I do think too much.

Since it's extremely unlikely that I would ever have that much money, there is no harm in indulging myself with fantasies about what I would do if I have USD 100M.

Gah. I need to think about this.

Okay. First thing first, I would set up something like a deposit with a healthy interest to generate an annual income that I would use to live comfortably, say about 100K a year? With that money, I would buy a house, set up my own personal library and just continue with my life. I would still want to keep on working.
Then a portion would be a gift for my Mum and another portion would be to give my brother's business a boost. The rest, at least half of the money, is for charity.

I know I am not too creative with it, but one thing I personally believe is that too much money tends to be not good. Not only it would skew your perspective and most likely would rob you of compassion and empathy for people less fortunate than you, it would make you surrounded by people who most likely only want to take advantage of you. I don't want that kind of life, to be honest.

I very seldom get jealous (because, you know, life's random and all that) but if there are people I am envious of, those would be artists, especially the ones working at Laika. It's a stop-motion animation studio based in Portland, who made awesome movies like Coraline and Paranorman. They would be launching The Box Trolls this September. Watch the trailer on Youtube, it's so good. They also gave some snippets of behind-the-scenes, and right there, I felt really jealous of their skills.

I think anything related to artistic pursuit must be done from the soul and how nice it would be to have a job that is in line with that. Not that I am ungrateful of my current job. We're still in a global recession and many people are unemployed out there. It's just that honestly, my job is just a job that I do because it pays the bills. I have to admit I am sort of in my element, you know, but accounting is not exactly an adrenaline-inducing field. People won't be like 'A new update on IAS 19 on Employee Benefits!! Let's open the champagne bottles!' I like routines and I like clear-cut guidelines. Accounting has that, but it's not very exciting, which explains why I spend most of my pocket money on books. According to S, I just run from reality through reading. She's not wrong.

Look at the poster and drool. It's just beautiful. I hope the movie is as good as it's visually appealing.
One thing I like about Laika's movies is the characters that they create look real, they're not the kind that adheres to good-looking people template like Disney. Many characters in Paranorman looked, well, normal. Some are even a bit ugly, others eccentric-looking, but many just look like ordinary people you would see on the street. I really like that. 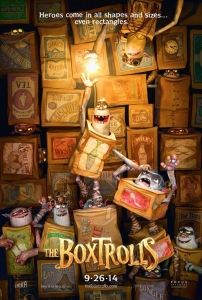